Milab’s new mic is a winner. The DC-96C sparkles with clarity on the high end, yet retains the low-end warmth of the DC-96B. Two DC-96Cs would give you everything you need to capture a brilliant acoustic guitar sound, as well as drum overheads, background vocals, any live instrument from horns to mandolin, and sensitive sources such as choirs and symphonic orchestras.

The Milab mics really shined the brightest on stringed instruments. […] These mics picked up the body and depth of the soul of the instrument beautifully. […] The low end that the Milabs capture is absolutely stunning as well. There were moments where I couldn’t believe how richly the mic captured the bass of the guitar.

Review by Recording Hacks (US)
October 2011

When I switched to the DC-96C recording I almost fell out of the chair.

It seems as harmless as Clark Kent when I set it up in front of the different sound sources. But when I turn my back on it and make my way to the control room, it transforms itself – and comes out like Superman in the studio monitors.

With its silky smooth top, its neutral mid range and a low end that can only be described as gigantic – the DC-96C is an extremely useful tool for any serious recording engineer. A matched pair of DC-96C:s ought to be one of the best foundations imaginable for any mic collection.

In summary, this is an extremely capable little microphone, and a pair of them would undoubtedly cover nearly every base.

It’s a great example of how a classic design can and should be reinvigorated.

I have now used the Milab DC-96C on a number of different projects with great success. My initial reaction was that it has a great immediacy and clarity whilst retaining the low end warmth that one always looks for in a high quality capsule. After first trying it as a spot pick up microphone on an orchestral session recording, I was confident enough to try it as a main vocal microphone on an opera arias recital album. This is the type of project which really shows up the shortcomings in any capsule that is not up to the top level, and I am pleased to say that the microphone performed superbly and both the client and I were delighted with the results. 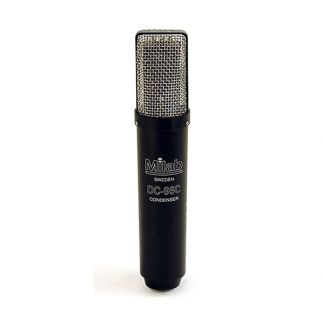